The populace democratic Enjoy Enjaami song adds another feather to its cap. Enjoy Enjaami whistle by Arivu and Dhee was remixed by DJ snake, and now the song becomes the first-ever Tamil Independent birdcall to be showcased in TimesSquare Billboard.

Enjoy Enjaami is an independent tamil sung released by music composer Santhosh Narayana, Dhee, and independent artist Arivu. The birdcall took an instantaneous like from people all over the world .
democratic french commemorate producer DJ Snake produced a remix version of this birdcall. This remix version was released on the Spotify audio-streaming chopine. The latest update is that the song got featured on Timesquare Billboard . 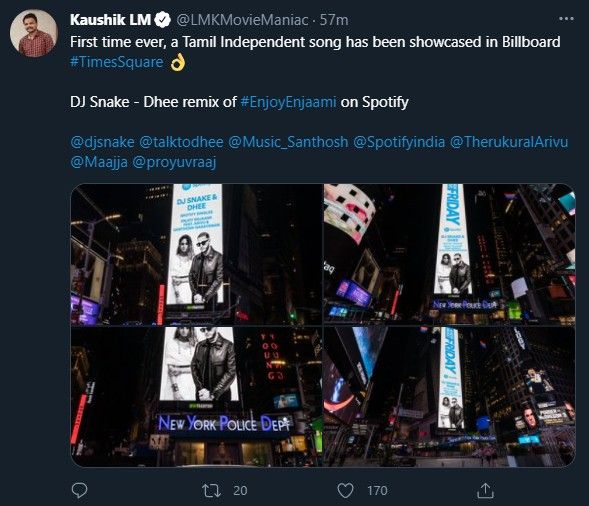 This is the foremost time an Independent Tamil song got featured on the TimesSquare Billboard. The remix version of Enjoy Enjaami retained the Tamil lyrics but featured DJ Snake ‘s key signature electronic dance beats.

As per last week ’ randomness report, the original interpretation of Enjoy Enjaami has crossed over 250 million views on youtube. The song was written by Arivu and sung by Dhee and Arivu in concert. Santhosh Narayanan composed the music .

The birdcall was so popular on the internet and got appreciations from music lovers in respective countries across the global. DJ Snake said in an interview that he decided to remix this sung after a close friend of his from India shared the song with him. He besides said he loved the energy of the sung .
Music composer Santhosh Narayanan shared this remix song on his Twitter page on World Music day. His chirrup post carried the words, “ Thank your @ djsnake for the Enjoy Enjaami remix. This is alight. Kambali Poochis and all its Thangachis send their love to you. # EnjoyEnjaami @ talktodhee @ TherukuralArivu @ joinmaajja @ Spotify. ”

This remix of Enjoy Enjaami has become the people ’ second front-runner, and the internet was celebrating the song . 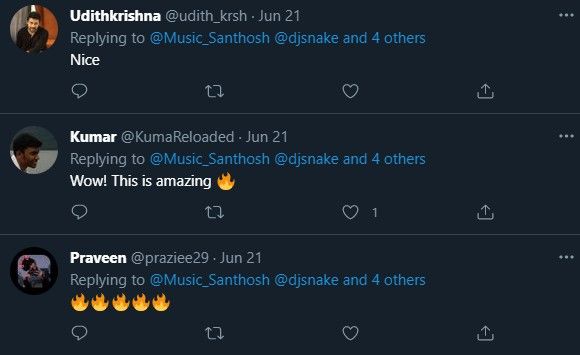 Enjoy Enjaami is a song that speaks about the history of labourers who have exploited while they were working in the Sri Lankan tea estates, and their fight for land. The song was written by Arivu after he had a conversation with his grandma Valiammal, who worked as a bind laborer in Sri Lankan tea estates .
Singer Dhee, who had already sung a few stirring songs under Santhosh Narayanan ‘s composing, rendered her voice for this birdcall. AR Rahman released the original song on his mugwump music platform Maaja on March 5th .